skip to main | skip to sidebar

The soft glow of neon lit the Streamline Age.  New.  Bold.  Radiant.  Good neon signs are transcendent, bad neon signs are still pretty damn cool.  I took this in New York in 2011, but it might as well have been 1941 with its message and style.  Its located somewhere Midtown, close to the UN.  It's warm red cut through the overcast day:

Closer to home is a shot of the Western Cafe on the Hilltop on a warm spring night in 1985.  Built in 1930, it survives as a coney joint, but stripped of its neon and wearing a tacky red canopy.  Its row of old brick storefront brethren to the east bulldozed.  Thankfully the quilted stainless porthole door is still in place. 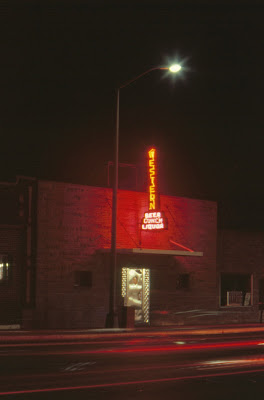 It was hard to choose, so here's another.  I just wish the ghost car was a '51 Hudson and not a square-headlight Ford: 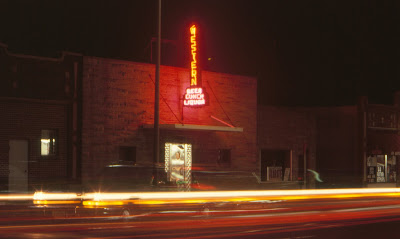 Across the street from the Western Cafe was a grocery store called Big Bear.  It was a regional Ohio chain that disappeared in the 80's.  Built in 1951 (Thanks Nick!) it was yellow brick, chrome and glass block.  The streetside sign was glorious neon, 2-3 stories tall, cream-yellow porcelain tile skin and brushed stainless cutout circles.  Here's its beacon at night: 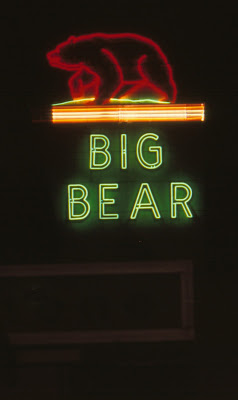 I'll close with a shot that's a bit of a cheat.  Its a section of street in the "2.0" version of the Street of Yesteryear at the Columbus museum COSI.  The segment of the exhibit that depicts a city street of 1962 makes a very effective use of neon: 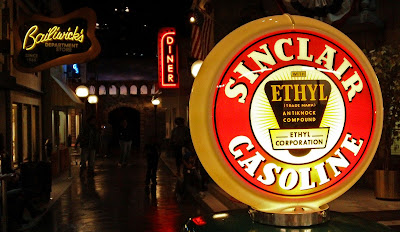